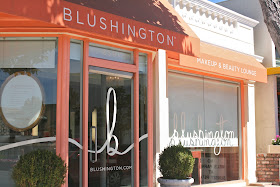 If you know me at all, you’ll know that grooming myself into a shimmery, mascara’d, contoured frenzy is high up on my list of priorities. I’m a firm believer in the mantra “when you look good, you feel good.” (I also believe that everyone should have the right to air conditioning and no one should believe in fashion rules that prevent you from wearing white after any particular holiday, but whatever.)

So when Kyle and I went to L.A. this past weekend, there was just one place I wanted to go: Blushington.

I read about Blushington about a month ago, and was livid with the universe for not telling me about its October 2011 opening sooner! I mean, come on! A salon that specializes in nothing but make-up applications?! It’s like my brain opened up, sprinkled glitter everywhere, threw on a strip of fake eyelashes, and sashayed all the way to West Hollywood. Except that it didn’t. Instead, founder Stephi Maron hatched the idea first. Well, okay, technically, Alli Webb did. Alli Webb is the brainchild behind Dry Bar, the blow-out only salon that’s inspired multiple impersonators. Stephi created Blushington independently of Dry Bar, but lifted heavily from its playbook. And smartly so! I mean, shit, D.C. is finally about to have two of its own Dry Bars and continues to expand  across the country! Solidifying its “match made in heaven” status, Blushington is designed to set up shop right next to Dry Bar, so you can get a full make over without even crossing the street. I don’t wanna get all SAT Verbal on you (I got a 750 on it, NBD), but Blushington is to your face as Dry Bar is to your hair. 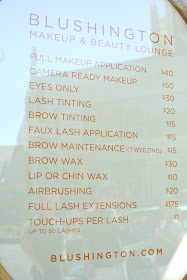 What I’m saying is, Blushington is a full-service make-up only salon. And it’s absolutely gorgeous inside. From the blush pink walls to the compact mirrored wall, it just as pretty a place as you want your face to be. 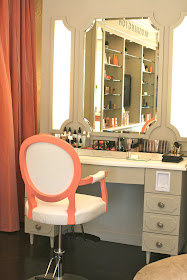 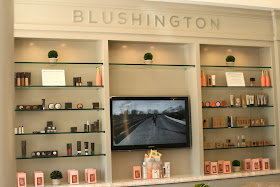 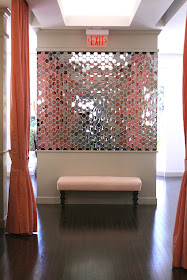 My make up artist was a gorgeous Brit named Jo. She greeted me with a glass of champagne (on the house) and walked me through the various “menu options.” She asked me what I was doing for the day (shopping) to help me pick out an appropriate look. I gave her the direction that, because I’d be shopping, I didn’t want to be treated like Julia Roberts in the scene where the sales ladies wouldn’t sell her anything, but I like to wear a lot of mascara and liner. At Jo’s recommendation, I opted for a combination between Simply Glowing and Smoke & Mirrors. I like to look a little slutty during the day. 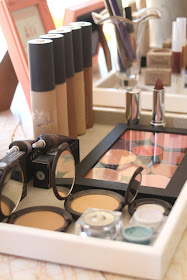 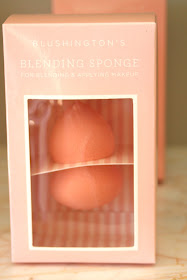 After prepping my face with a make up removing towelette, Jo primed my face with Stila BB cream and began working her magic. I say “magic” because I walked in with a raging case of sunburn. I’m usually religious about my sunscreen application, but having applied my make up on the plane, away from my moisturizer with SPF, I was forced to apply my sunscreen on top of my already made up face, resulting in a severe case of “you missed a spot” on my forehead. But that didn’t deter Jo—not only did she cover it, but she did so in a way that didn’t even look like I was wearing make up. Don’t ask me how she did it, because I don’t know. What I do know is that I love her and want her to be my new best friend. And that’s not just because she complimented my eye color, soft skin, and great eyebrows. Okay, maybe it is a little, but that’s what friends are for!! 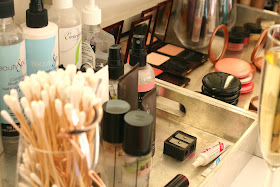 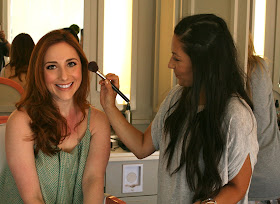 {Me and my new make up artist BFF, Jo}

About 30 minutes later, I emerged from the chair with flawless skin, a bronze smokey eye perfect for daytime, and what can only be described as a California glow. Well, as much of a “glow” someone with nearly transparent skin can muster, anyway. 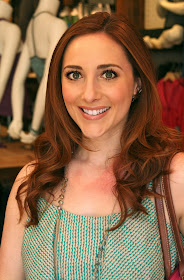 {You can see the partial sunburn on my chest, just to give you an idea of what Jo covered up on my face!}
Of course, you know I am more than capable of doing my own and others' make up, but for those of you who aren’t as confident with an eyelash curler, Blushington can be a great way to learn a bit about the art of painting your face. It’s also a great deal for special occasion looks (apparently Halloween is a big day/night for them!) without spending a lot of money. But sadly, unless you live in the L.A. area, you’ll just have to do it yourself.

As I left, I ran into Stephi and probed her for information on future store openings. Don’t worry—I put in a plug for D.C. We’re getting two Dry Bars in the next couple months. For now though, they’re just planning another store in Dallas. Texas women do love their make up, y’all. Where else do you think I get it from??

Has anyone else been to Blushington? What do you think of this make-up only concept??
CupcakesOMG! at 6:03 PM