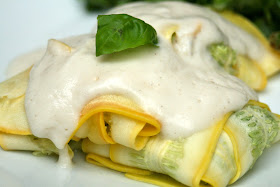 I'm about as much of a role model as, say, Karen Walker, but I do hold myself somewhat accountable as a role model to the Paleo community, insofar as I want to share what I hope are recipes you've never seen before. What I hope is that this "ravioli" is one of those recipes. 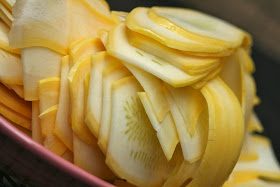 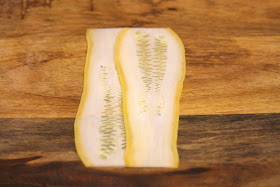 I had a hard time describing the instructions below for assembling, so look! I made it easy and just threw some how-to pictures up. And I mean, reading is for ugly people, anyway. 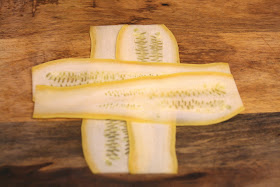 I made a filling with chicken, spinach, and mascarpone, but you can do anything. I'll probably do a ground beef and tomato filling next time. 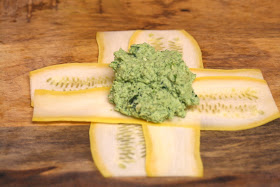 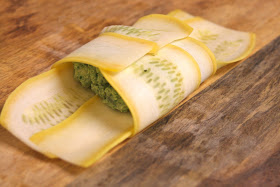 I secured the raviolis with a toothpick until I served them, but for the most part, they'll hold their shape pretty well, as long as your squash is sliced thin enough. 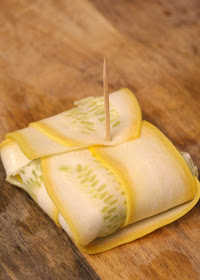 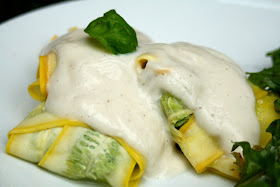 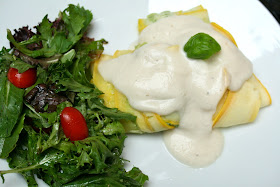 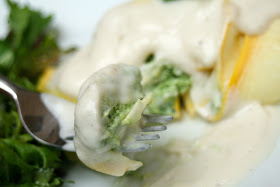 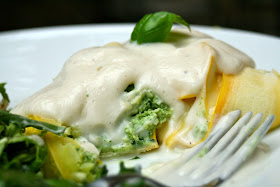 
1. Cut ends of squash off and slice down the middle so you have two halves. Using the narrowest setting on your mandolin, slice the squash into long, flat strips. You'll end with around 70 or so strips.
2. In a large pan, heat oil over medium heat. Add onion and a pinch of salt and saute for about 5 minutes, until nearly translucent. Add garlic and saute until fragrant.
3. Add ground chicken to onion and garlic and saute until chicken is cooked all the way through.
4. Squeeze all the excess water out of the spinach, then ad chicken, spinach, salt, pepper, and mascarpone to a food processor or blender and puree until mixture reaches desired consistency (I like it relatively smooth).
5. Assemble the ravioli by just barely overlapping two strips of squash (pictured above). Do the same over the middle of the first two strips, but perpendicular, creating a cross or "t" shape.
6. Spoon filling in the center of the cross, then bring the ends of the strips together, overlapping each other. If that doesn't make sense, just see the picture above.
7. Secure with a toothpick.
8. Before serving, steam raviolis for about 4 minutes, or until squash is tender and inside is warm.
9. Top with Caulif-redo or sauce of your choice.
CupcakesOMG! at 8:00 AM