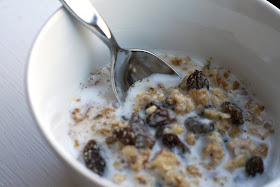 Paleo breakfasts are pretty straightforward: bacon and eggs. Of course, you can switch it up by frying 'em, scrambling 'em, poaching 'em, and hard boiling 'em, but in the end, you're still eating eggs. And let's face it--bacon and eggs are a delicious breakfast (unless you're a vegan, in which case it's an aborted murder scene on a plate!!! mmmmm, breakfast!), but sometimes, you don't want bacon and eggs. Sometimes, you want cereal.

Alright, so I'm not making any bones about it--this isn't the sugary cereal from your childhood. There's no sugar, no grain, and no prize tucked away in a box emblazoned with some kind of colorful wildlife specimen. BUT, you can eat it with a spoon, and if you've already removed gluten and refined sugar from your diet, it does hit the spot. Oh and also, YOU WON'T GET DIABETES FROM IT!! Plus, it's hysterically easy to put together.

First, grab some nuts. When you're done with that, grab some walnuts, almonds, pecans, pistachios or whatever unsalted nut you have lying around. Blitz it into a small chop in your food processor: 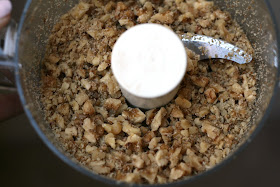 Then, grab some dried fruit (no sugar added), like cherries, cranberries, blueberries, or raisins: 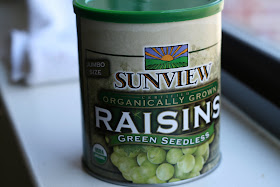 Add the nuts and fruit into a bag: 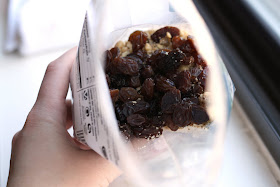 I reused the bag the nuts came in. I'm resourceful. (Sidenote: anybody remember those Malt-o-Meal commercials from the '80s? Ya know, during Pee-Wee's Playhouse on Saturday morning with that guy walking like a duck through the cereal aisle??? Well, consider this your own Malt-o-Meal, in that, it comes in a bag and is easy to store. And also makes you walk like a duck.) 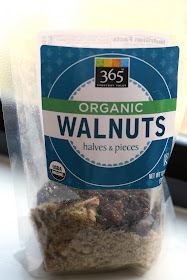 Then, shake up the bag to mix everything together. In case you don't know how to read, here's an action shot of me doing the thing I just wrote, not that you'll understand this...: 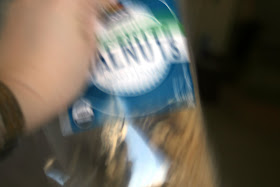 This is probably three servings worth of cereal: 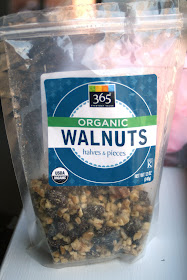 Your cereal's all mixed up now! Ain't life grand? 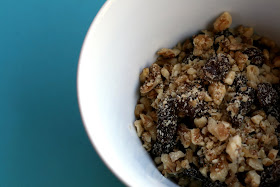 When you're ready to eat your cereal, top it with your non-dairy beverage of choice (if you're doing paleo, anyway). Almond milk is good, but I prefer Coconut Milk: 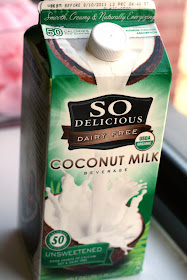 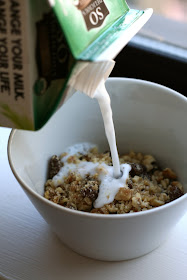 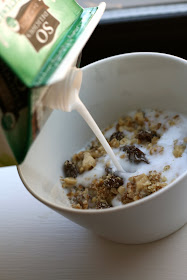 And now you can eat! What's cool about paleo cereal is because it's not made with grains, it won't get soggy in your milk. 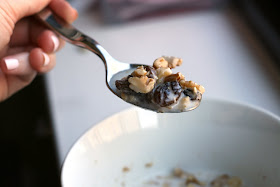 In the words of Ina Garten, "how easy is that?" 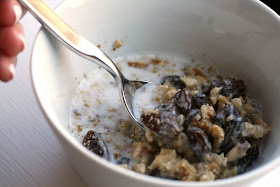 Paleo Cereal (Adapted from The Paleo Project)
Makes about 3 servings


Using a food processor, pulse nuts into small pieces. In a bag, mix nuts, fruit, and coconut. When ready to eat, top with milk. Revel in your ability to abstain from sugar, grains, and dairy. Gloat to taste.
CupcakesOMG! at 11:13 AM